Debut 7″ single from Purple Hearts, three minutes of perfect pop on each side. Lovely stuff. Text courtesy of the wikkie, black and white photographs from the Steve Butler collection. 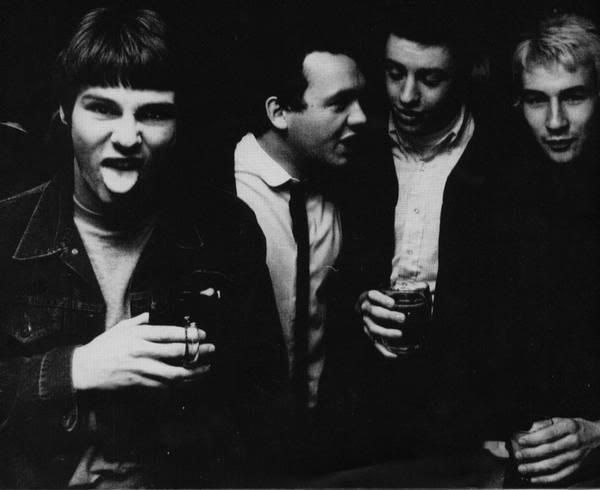 The mod revivalists, the Purple Hearts started in 1977, when teenagers Jeff Shadbolt, Simon Stebbing, Bob Manton, and Nick Lake formed the band in Romford, Essex as The Sockets, before they even knew how to play their instruments (taking a cue from the then prevailing DIY aesthetics of the punk rock movement). They formed for the sole purpose of getting a support slot at a Buzzcocks gig at the East London Polytechnic, to debut their tongue-in-cheek rock opera, Reg. The amused audience took the amateurish teenage punks to their hearts and the group decided to soldier on, even after they had accomplished their original goal. Several gigs followed, including an appearance on a float in the Romford Carnival.

In 1978, their drummer Nick Lake broke his leg and was replaced by Gary Sparks, the band switched their name to Purple Hearts, after an amphetamine-barbiturate mixture popular with the mods of 1960s. Accordingly, they changed their sound from the rough-edged punk rock which was already beginning to fall out of favour to a more mod-influenced sound, which, thanks largely to The Jam, was beginning to capture public attention.

Their biggest hit was their first single, “Millions Like Us” (1979), which peaked at #57 in the UK Singles Chart. They following year they issued their debut album, Beat That!  But the mod revival craze of 1979 was rapidly dissipating and they departed Fiction Records, over artistic differences. This precipitated an extended hiatus, with bassist “Just” Jeff Shadbolt joining The Rage with Buddy Ascott from The Chords. Simon Stebbing made records for Midnight Records as a member of ‘Hearts on Fire’, who released two 12 inch EPs, and an album, Dreams of Leaving.

Purple Hearts resurfaced to release a live album, Head on Collision Time recorded live at the 100 Club, and their second studio effort, Popish Frenzy in the mid 1980s. They gigged intermittently through the late 1980s before once again petering out.