Uploaded tonight are five tracks taken off a thirteen track CD release by the ‘blink and you missed them’ Toms Midnight Garden. These five tracks were originally on the ‘Gap In The Curtain’ cassette release that was planned but never released on 96 Tapes. Many thanks to Dev the singer, guitarist and lyricist of the band for supplying everything for this KYPP post.

As the second wave of punk drew to an end during the early 1980’s there was for a brief period a sub-genre that attracted a mix of  goth’s, anarcho punks and psychobillies.

In the UK bands such as Theatre of Hate, UK Decay, Sex Gang Children, Blood And Roses, Southern Death Cult, The Mob, Flowers In The Dustbin amongst others picked up the baton from earlier groups like the Ants, the Banshees and Joy Division; creating emotional and imaginative music forged in the squats across Thatcher’s Britain.

During 1983 in the interim between leaving Flowers in the Dustbin and establishing the more singular While Angels Watch, Dev formed the band Tom’s Midnight Garden with friends Bill & Kappa who had been involved with the now legendary group Anabolic Steroids a few years before. 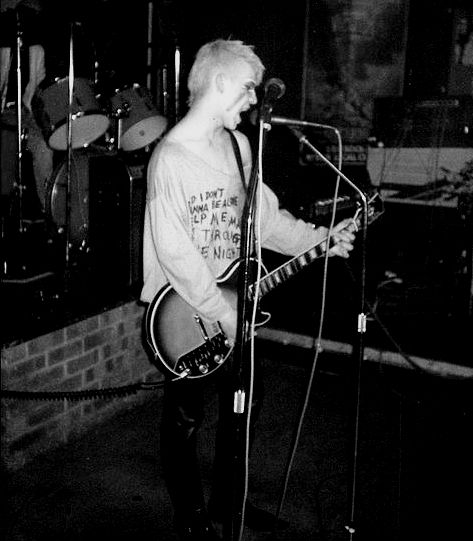 Lance Hahn writing a piece on the band in San Francisco’s Maximum Rock And Roll magazine had described Tom’s Midnight Gardens music as “melodic punk with as much in common as early 4AD releases as with Anarcho-punk… and lyrically unusual, mixing politics with crypto-spirituality or Crowley-esque philosophy.” Others have suggested similarities to the Banshees, Crisis and Play Dead.

In contrast the gigs would often be shambolic affairs with a party-like atmosphere played in squatted venues, clubs and pubs organised by various collectives to raise money towards direct action such as ‘Stop the City’ or to help maintain the venue.

It was at this level, with Dev squatting himself, that the band developed associations with individuals and groups in London’s alternative scene such as the Kill Your Pet Puppy Collective and Temple of Psychic Youth while gigging with Flowers In The Dustbin, Hagar the Womb, Omega Tribe, Decadent Few, Faction, Wet Paint Theatre and many others.

During this exciting period the band recorded a large part of their set at 99 Studio in Plumstead London. These recordings were to be released on the Hackney based 96 Tapes cassette only label, which along with the All the Madmen record label represented much of the underground music of the time. Both 96 Tapes and All The Madmen records were based in the same row of Brougham Road Co Op houses at this time. However the plans for  tape being released were shelved when the group split towards the end of 1984. This particular journey was over.

The band briefly resurfaced as TMG in 1985 to record a final demo and play two gigs. Both occasions with different line-up’s and a more post-industrial / psychedelic sound which would later lead to Dev forming his long-standing project While Angels Watch.

In association with Infrastition records Dev has remastered and released the 1984 studio sessions in their entirety along with three tracks from the final demo.

The CD, ‘To Kill a Klown’ (after one of the groups most popular songs) is available now from the shop at this website HERE.