During a blustery and wet Thursday night in Brixton south London, a book launch was being held. I had traveled from Dagenham and was rather moist when entering the Windmill pub near to Brixton prison, and a lifetime ago near to where I used to stay in a squat with Sean ‘Gummidge’ and various other kindly folk along Elm Park, the road directly opposite the prison.

The book in question that was being launched (even though I had my copy already sent to me) was ‘The Truth Of Revolution Brother’, the book title lifted from a line from ‘Bloody Revolutions’ by Crass.

Within the binding of this new book there is a lot of recognisable names being interviewed at length about their pasts and the present status that their find themselves in. Seemingly a roll call of the inspirational people in the punk world that I had held in high regard in my younger life.

Vi Subversa, Penny Rimbaud, Mark Mob, Steve Lake, Gee Vaucher, Steve Ignorant, Pete Fender and Sid and Zilla of Rubella Ballet, Mark Stewart of The Pop Group and the On U Sound Maffia are all featured at length.

Our very own Tony D is in the book.

There are many other names who were interviewed and have inclusion in the book, all wonderful people in their own right.

This is one hell of a publication with some stunning photographic portraits of the interviewees and original artwork from Gee Vaucher. Flicking and speed reading through some parts of the book prior to the launch was a pleasing experience for me, so I was certainly up to attending the book launch. The book launch itself was invitation only and only for one hundred and fifty guests. I was one of those invited by the writing team a week or two prior to this event.

After getting a soaking at the start of my journey from Dagenham and suffering several train delays and cancellations, I was not expecting this night to fully (or even partly) uplift my already dampened spirits.

I was thankfully wrong.

Firstly, and to my surprise, there were people actually there in attendance considering the weather. Secondly a lot of the people that were there were the same inspirational people in the punk world that I have respected for well over thirty years and had been interviewed for this published book. Thirdly the alcohol was free, and lastly The Mob performance backing up Steve Lake (The Zob? Mounds?) was a moment to treasure for many years to come. Sound man on the night, Grant Showbiz, long time associate of The Mob and Zounds.

The Mobs set (without Steve Lake) that followed on in this small venue, was one of the best and most intimate performances that I have witnessed by the band since the reformation, and that is no mean feat.

After my initial reservations of this evening traveling down from Dagenham, I would go as far as stating that this whole evening was one of the best evenings that I have attended throughout the whole of 2014.

I decided to ‘video’ The Zobs / Mounds part of the evening and just take plain photographs of The Mob after that performance. These performances were the last of the evening. There had been earlier (and very solid) performances from TV Smith, Dunstan Bruce, a short Steve Ignorant spoken word section and finally Steve Lakes Slow Erosion.

‘A Little Bit More’, ‘Can’t Cheat Karma’ and ‘Dancing’ were the Zounds songs that were getting an airing on this wet night in this small venue in Brixton. I knew this information in advance so was prepared for the videoing of the performance.

I have never done a video before on a camera (or any thing else for that matter) and the video turned itself off automatically after twelve minutes or so. I guess that’s what it was set to. There was a lead and / or amplifier problem on stage which Grant Showbiz and Steve Lake had to deal with, taking a couple of minutes to solve wasting THAT time that might have been useful. My video stopped automatically right at the very end of ‘Dancing’.

Right at the end. Perfect timing. All well and good you shout.

What a bummer, I would have loved to have included the whole ‘set’ but to be honest I had no idea what the sound quality of the video would be as I was stuck underneath a speaker, or what the quality would be capturing the images of the band in a dark room with my battered old camera. I paid it no mind for the rest of the night.

The Mob performed a powerful set throughout the rest of the night that was enough for me.

Myself, Mark Astronaut, a pretty drunk Tony D and for a short time TV Smith and Gaye Advert all got on the train at Brixton finally splitting up at various stations along the Victoria line.

When I got home I uploaded photographs and the video and to my surprise the video was not only useable but also very clear both in the images and the audio, this paradoxically made me feel slightly worse that my camera had turned off automatically!

I had no idea how to convert my video onto YouTube, but the next day after some advice I managed to upload my first ever video to that platform and then to share it onto various sites to a very positive reaction.

Tonight, the night of my birthday in fact, I share the video onto KYPP as well as a small selection of photographs I took on the night. 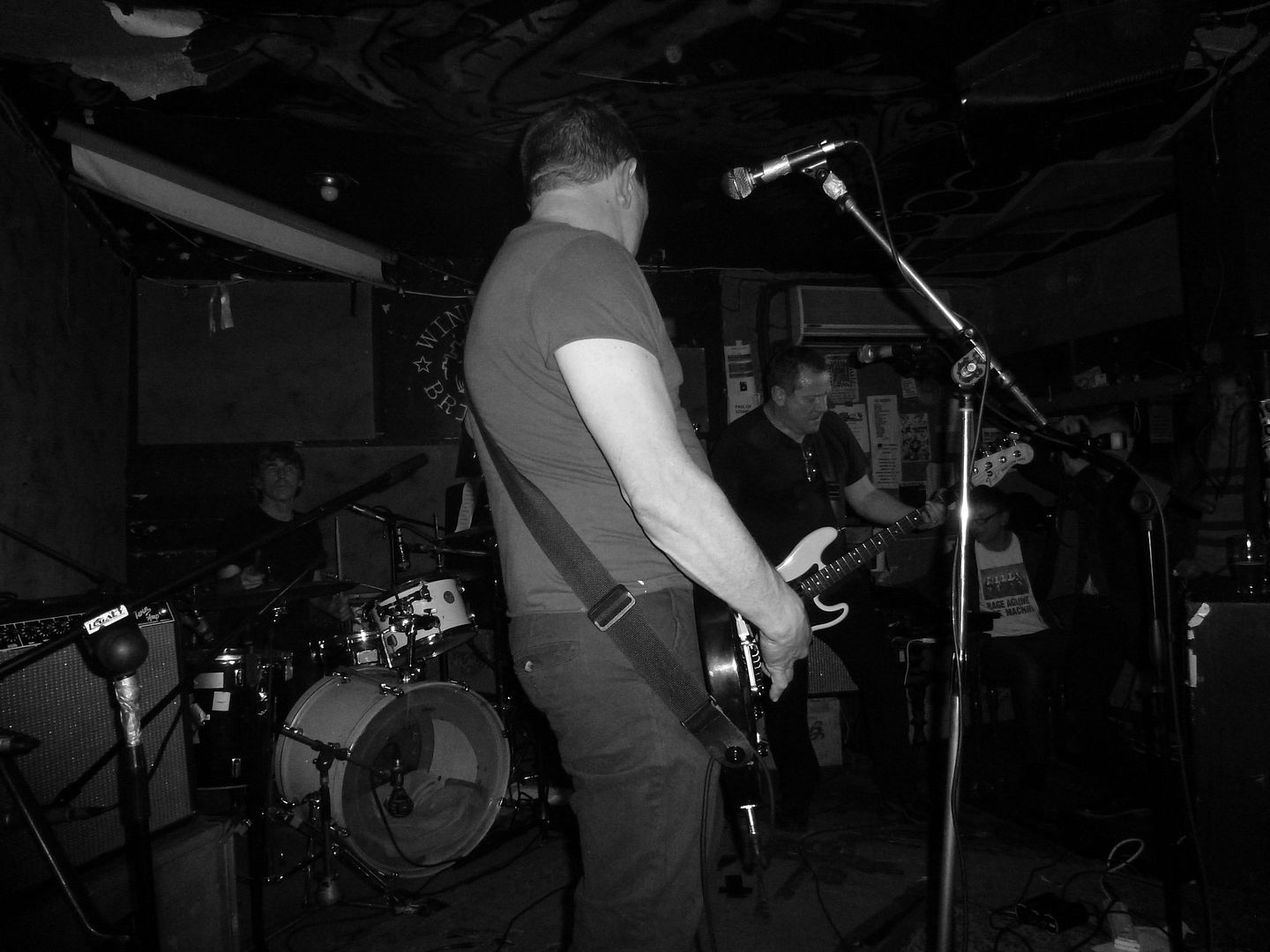 Due to now having a workable YouTube account and knowing how to use it, I decided to upload some other videos (actually super 8 footage) onto YouTube.

The first upload was The Zob / Mounds video that I took the night before of course.

The second upload was an intimate interview with most members of Crass recorded on super 8 video in 1984 around the impossibly small kitchen table at Dial House.

How that many members of Crass all got around that table remains a mystery to me!

Possibly the last ever interview with Crass.

The original super 8 cassette was transferred to a DVDR several years ago for £20 by Stanley Production in Soho and now was my chance to share this interview which Penny Rimbaud has informed me “it could have been a Sounds interview because there’s a Sounds article of the time where I’m wearing the same green polo shirt that I was in the film. It must have been one of the few times in my life when I haven’t had sideboards”.

Incidentally Penny Rimbaud was meant to be at the book launch but felt unwell on the day so had to stay home.

The third video I placed up onto my YouTube channel had also been transferred from a super 8 cassette to a DVDR several years ago again for £20 by Stanley Production in Soho. This was a live performance of one of my favourite bands of the mid to late 1980’s World Domination Enterprises.

World Domination Enterprises were a decent night out. I had attended several of World Domination Enterprises London based gigs, and I never once felt that I was not witnessing something special within the venue that the band were performing in. All ‘Dread At The Control’ T shirts and Simonon bass moves.Very loud, lots of feedback, blinding. The band which used to be named 012, included as a member Kif Kif (ex of Here And Now) on grating, scraping guitar and snotty, fuck you vocals.

So I have all those videos up now on YouTube which are now shared onto this KYPP post.

As an aside, one other person that was interviewed for the ‘The Truth Of Revolution Brother’ book and was also at the book launch / gig in person was Graham Burnett.

Graham had his new publication the ‘Vegan Book Of Permaculture’ on the merchandise stall that night in Brixton, so I bought a copy.

A must have book if you are vegan, or thinking of turning vegan, detailing the permaculture lifestyle alternatives and including many vegan recipes all held within the three hundred pages of this book.

Graham stated; “even as a small child I seemed to make the mental connection between the cows I would see in fields and the meat on my plate, and I became vegetarian when I left school in 1977. By the early 1980s I’d begun to realise that the dairy industry had as much (if not more) involvement in animal cruelty as the meat industry, but it was through meeting a young woman who became a life long friend called Seema Kapoor at a protest in 1984 that I finally joined the dots and become vegan myself”.

Finally I have added a documentary film of Mark Astronaut.

Mark Astronaut has links with The Mob also with Steve Lake and Zoundz. Mark also has links with J.B who helped release the debut Astronauts album ‘Peter Pan Hits The Suburbs’ on Genius records in 1980. The person engineering the tracks on that album was Grant Showbiz, The Mob, Steve Lake, Grant Showbiz and Mark himself were all present at the book launch in Brixton. Steve Lake stating from the stage, prior to starting his set with Slow Erosion, that “I feel I am at Meanwhile Gardens in 1978″!

Mark Astronaut sadly never had links with Crass, which is a shame as if he had, The Astronauts could have shared in some of the ‘glory’ of having a 7” single released on Crass records. Probably.

I remember being interviewed for this documentary by Tali at the office of Rob Challice (ex All The Madmen records) in Shoreditch several years ago, and have not thought about the film for a very long time. I assumed the film had been given up on. Been canned.

But… Here it is, found by Robin Basak I believe, who co-incidentally also released an Astronauts album in 1990 on his Acid Stings record label.

This documentary is something special, showing Mark Astronaut at ease and being interviewed with care and consideration by Tali.

I also appear on the film for very brief moments at roughly 3.40 and 37 minutes grinding my teeth!

Hoping you enjoy all the videos.