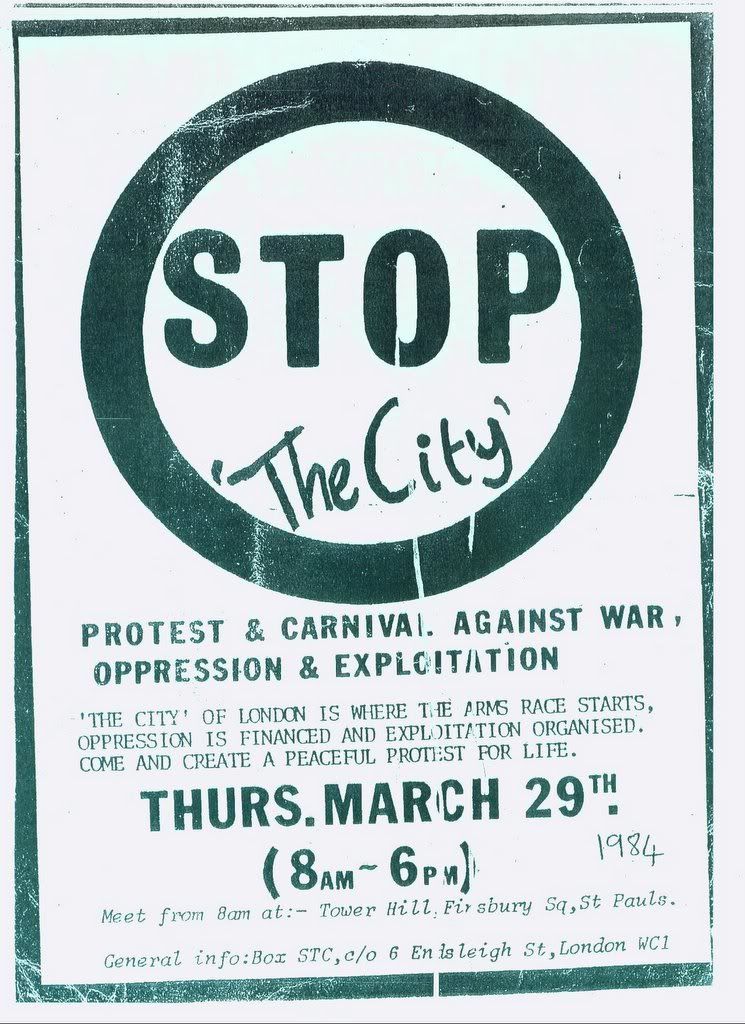 Reading through the veritable frenzy of spectacular speculations in the media that the 2009 London G20 summit will lead to anarchy in the UK (or at least in the City), I was amused to notice that the second Stop the City took place on 29 March 1984 – twenty five years ago.

However, apart from a thoughtful article found in SchNews (who have been going for 15 years) the media’s collective memories don’t seem to stretch as far back as 1983/4. Parts of the Schnews article connect back even further to the radical alternatives advocated by Undercurrents magazine in the seventies.

In the near future we can expect to see scenes reminiscent of post-war Britain, when people turned to allotments during the times of rations and scarcity. Allotments already made a comeback over a decade ago as people resisted the hegemony of the supermarkets, but the revival may have only just begun. Economies of scale should follow with an increasing need for more localised farming and co-operatively run food growing. Out of necessity, many people who’d never before imagined it possible may well find themselves involved in food production.

The article even has a Spanish anarchist quote by Durruti … the same quotation which, coincidently, can  also be found on the re-released Let the Tribe Increase due out on 6 April.

Whatever happens in London over the next few days, however spectacular, the real problem will remain :how can “self-sufficiency, conservation and the co-operative pooling of resources”  become the foundation for a sustainable future? The “new world we carry here, in our hearts”.

This week’s G20 mobilisation in the City Of London – by calling up the ghosts of Reclaim The Streets and Stop The City, as well as incorporating elements of more recent movements such as Climate Change and anti-war campaigns – is shaping up to be one of the most important mobilisations in central London during the past decade.

The very fact that the ad-hoc G20 Summit is ‘needed’ next week in London is confirmation that we were right all along and now it’s starting to kick off! Yep, the system was as unsustainable as it always looked, and the globalised capitalism which made us rich as it made others poor is finally reaching its end game. Poverty hasn’t been made history but is instead coming home to us. A response – albeit harsh – to those affected by the credit crunch is ‘welcome to the majority world’. 90% of the world’s population don’t go through consumer goods as if they fell out of a corn flakes packet, so why should we in Britain?

This crash looks like producing the kind of economic cutbacks environmentalists have been screaming out for for years. UK car production is down 60% in the past year – difficult for those who lost jobs and have families to feed – but maybe it heralds a less consumerist society. The global aviation industry is being severely hit by a large drop in demand and will lose up to $8 billion this year. Building developments are being dropped left, right and centre.

“We are not in the least afraid of ruins. We are going to inherit the earth, there is not the slightest doubt about that. The bourgeoisie might blast and ruin its own world before it leaves the stage of history. We carry a new world, here, in our hearts. That world is growing this minute”. – Bienventura Durruti – 1936

With the cracks gaping wide in Capitalism’s shiny facade everything’s up for grabs as sections of society not used to scraping by on benefits or minimum wage will start to see just how vulnerable they really are. The test to will be whether people who grew up in the Thatcher Blair years will stand by the dog-eat-dog me-first attitudes which have become ‘common-sense’ – which during a crisis could play into the hands of the far right. Or if they will turn to the growing set of solutions which has been developed over the past 40 years and which SchNEWS has been banging on about for the past 15: ecological and social sustainability and a equitable system. How? Using ideas gleaned from Anarchism, Ecology and anything else that has challenged the aura of inevitability that previously surrounded capitalism.

There are many political activists in Britain and elsewhere who have both been preparing for a collapse and even cheering it on. But now the signs are here, do even the most hardened chaoto-nihilists really want to be reduced to fighting over the last tin of baked beans in the radioactive ruins of Sainsburys? Even stockbrokers may find themselves turning to previously marginal ideas, long the hobby-horse of apocalypse-fetishists and 60s beardy-weirdies, such as self sufficiency and non-capitalist modes of organisation.

The recession is already biting in certain key areas. The cost of basic living has shot up in the past 12 months: power has gone up 22%, food 11%, and transport fares 8%. Power, food and transport rank alongside housing, education, water, and health as essentials in any functioning society. If the capitalist state can no longer provide these affordably (or at least the illusion of them), then communities must take things into their own hands.

Take just those three – power, food and transport. The key to wresting these from the clutches of multinational capital is self-sufficiency, conservation and the co-operative pooling of resources.

It’s obvious that houses shouldn’t be so reliant on external power – and held to ransom by energy cartels. Not only should they be more energy efficient but also be able to generate their own power, renewably. Energy generation at all levels has to also come from renewable sources – it’s a no brainer. Currently with our government refusing to properly invest in renewables, energy companies like Shell are cutting back on their already meagre sustainable energy budgets.

Food is even more essential than power, and the average Brit is more of a hostage to a small number of international corporations than ever before. In the near future we can expect to see scenes reminiscent of post-war Britain, when people turned to allotments during the times of rations and scarcity. Allotments already made a comeback over a decade ago as people resisted the hegemony of the supermarkets, but the revival may have only just begun. Economies of scale should follow with an increasing need for more localised farming and co-operatively run food growing. Out of necessity, many people who’d never before imagined it possible may well find themselves involved in food production. Councils have so far refused to meet this growing demand with years-long waiting lists for a bit of yer own land, so now is the time for residents to take unused land into their own hands for a spot of guerilla gardening. With the high costs of organic food out of the reach for those forced to rely on the chemically saturated fare of budget supermarkets, allotments are the best option for the production of wholesome food.

Transport is not so life-or-death, but is still a basic necessity. However until anti-gravity devices and water powered engines are invented, we are reliant on oil. But again, economic forces are about to severely limit this oil consumption – and that includes the transportation of workers, food and other commodities. Once more, this points to localisation: more locally grown food – to lower food miles, and less commuting to work. If far fewer people are able to run a car, development of public transport infrastructure will be key and bike use will go up – great news for the smog-choked cities of Britain and everywhere else. Anyhow, countries much poorer than Britain manage to maintain public transport systems better than ours – which is no surprise given that it’s always been a policy of UK PLC to pander to the road lobby.

At this point it is more important than ever that people have these discussions and are informed of these potential solutions. A set of new/old ideas are about to have their day. Maybe people might think that they’d need to be dragged kicking and screaming into wearing tofu sandals in a vegan tree village, but actually they may find that the values of mutual aid and cooperation have always run through society. They may even come to relish the sense of community which could emerge from all this, and not want to go back to the atomised society they’ve left behind.