Leo from Soundbox Studios, Thomaby Gardens, Edmonton, N18 passed away on Friday 20th August after losing his fight against cancer.

He was an important part of the anarcho-punk scene and I am sure his friends and members of bands that he worked with would like to know about his passing on.

Other than being involved in a huge way with DIRT, Rubella Ballet and Crass, Leo had hundreds of musicians pass through his studio over a period of 30 years. Bands like the Stratford Mercenaries and Shwartzenneger, both bands with Steve Ignorant on vocals after Crass had folded. Other notables going through the studio were Lack Of Knowledge, Omega Tribe, Honey Bane as well as members of the Buzzcocks, Angelic Upstarts, Citizen Fish, and so many more it would just run on and on like a who’s who of punk. Similar of course to the other north London studio, Southern Studios in Wood Green run by the late John Loder who knew Leo well.

Leo also done lighting for all the bands DIRT toured or performed (before 1983) with like Flux Of Pink Indians, The Mob, Conflict etc. Notably Leo also was in charge of the lights at the Zig Zag Squat all dayer, the same gig that Fox and Vomit, both of Leo’s sons left DIRT.

Fox and Vomit DIRT at the Africa Centre Covent Garden – 1980

The DIRT skull was also Leo’s design. He designed and painted the logo / banner long before Fox and Vomit joined Gary, Deno and Lou to form DIRT.

It was the backdrop for Fox’s and Vomit’s old punk band called the Gutter Rats, a band that was going nowhere, so it was used for DIRT for which it is now best known.

The logo nowadays is of course an iconic anarcho-punk image from 1980 in the same way as the Crass symbol or the Poison Girls ‘crow’ symbol has become.

Leo’s funeral is at 3:30pm on Monday 13th September at

Vince has informed me that anyone who knew Leo is more than welcome to attend. 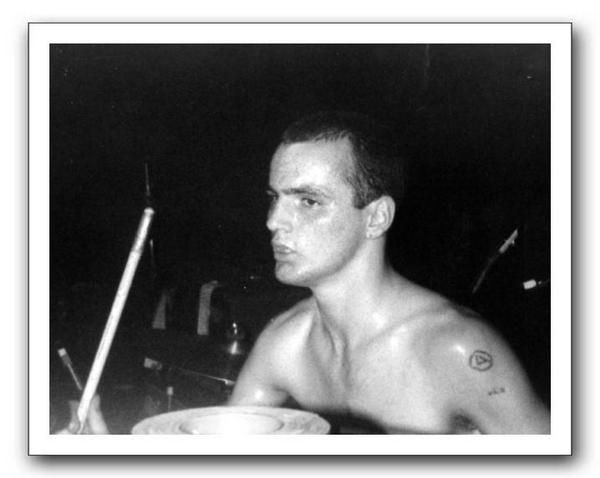 A Poem For My Dad

Of all the renowned men throughout history,
Some of them good and some bad,
But they’ll never be,
As iconic to me as the man that I’ll always call Dad,

You can keep your Mandela and Churchill,
Newton, Elgar or Chomsky,
Your Turner and Dali or
Mohamed Ali there is only one greatest to me,

As a child he’d chase away monsters,
As he tucked me up each night in bed,
And then work in the rain but never complain,
As long as his young boy was fed,

He’d carry me if I felt weary,
Pick me up whenever I fell,
Wiped the tears from my eyes,
Soothed with words kind and wise,
Healed my pain like a magic spell,

And now I’m a Dad with three children,
I’ll try to do as you would do,
And maybe one day I’ll be able to say,
I’m half as good a dad as you