A band that I know not too much about other than they seem to have been based in south London and that these recordings were completed on an eight track mixer based at the home of Rory Cargill’s Alma Road in Wandsworth. Rory Cargill remains the only constant member of The Invisible Band from the bands formation in 1981 until, well today.

The line up of The Invisible Band that recorded these tracks onto this tape, consisted of Julia on vocals and percussion, Rory on the guitar, bass and keyboards along with Jerry on the drums.

These tracks by The Invisible Band would appeal to anyone that likes Here And Now, Gong and Ozric Tentacles. The cassette tape is a grower and the listener ‘gets it’ after a couple of plays, or at least I did. 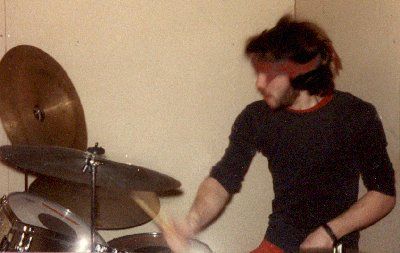 The band were regular performers at the Stonehenge festival in the early 1980’s and were known to the Tibetan Ukranian Mountain Troupe, a group of colourful entertaining travellers who between 1982 and 1983 were based, when not on the road, in the squatted bus station near to Brougham Road in Hackney.

The Tibetan Ukranian Mountain Troupe started in Kingston when it was called the Bombay Bus Trucking company and Mr Bombay was the boss, whoever he was the troupe never saw him, he did not exist. Perry Balfour, Perry Hazard was the young inspirational influence and Mike and KP got given the Blue and White marquee so they took it out on the road. Perry’s dad was Michael Balfour, a professional movie actor and the troupe’s show guru and link to the tradition of performance. He was also very impressed with the notion of love and peace as a youth movement.

At the end of 1979 at the festival of Fools in Penzance, wanting to take the mickey out of the so called alternative theatre scene, which they saw as an imitation of traditional stuff and nothing new, they came up with a sketch which was the sand dance, throw sand on the floor and do a silly dance to Egyptian music with a trio of idiot and dumb artists. As they were leaving Perry’s ‘Bella Vega’ bus, they needed a name so Perry dragged it off the ethers, and came up with the Tibetan Ukranian Mountain Troupe, a troupe from another planet or another place which would always be bizarre and so it was.

The name Tibetan Ukranian Mountain Troupe was kind of a yin -yang thing. The Tibetan part represented the spiritual, metaphysical aspect of life whereas the Ukranian bit was the more physical, down to earth side of things. The deliberate miss spelling, although originally a sign writing error, was kept in for numerological balance. The Mountain bit because it was there, and the Troupe because they were!

Some ancient clown thought of it off the top of his head!

There is no doubt that the Tibetan Ukranian Mountain Troupe hold a unique place in the ranks of great British hippie eccentrics .Their activities were by no means confined to free festivals, as they appeared at almost all of the commercial East Anglian Fairs and Peace Fairs of the early 1980’s.

The Tibetan Ukranian Mountain Troupe stopped being called a Troupe by 1986. By this time it had become clear that they had evolved into something more and myriad diverse. Although the troupe had roots in the UK Free Festivals and Albionic fairs of the 1970’s and early 1980’s their travels and exploits in Europe in the early to mid 1980’s had brought them into contact with a whole and other world of colourful opportunities, excitement, challenge and medical conditions of great interest.